The intent of this material is to communicate the best practices for design of Segmental Retaining Walls (SRW) as determined by Allan Block Corporation based on 25 plus years of research, design and field experience. This is not meant to be a final authority as each project has its own set of unique situations.

It is the recommendation of Allan Block Corporation that the local engineer of record work for and be paid by the project owner. It has been determined that the local engineer of record should be the Project Site Civil Engineer as they are best suited to take responsibility for the design, and how it affects the site, whether they do the design in-house or use an outside consultant to do the design for the project. 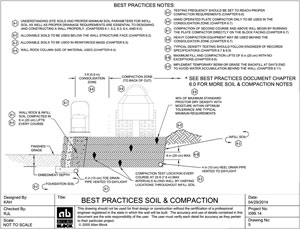 Click on the topics below to view more information on the best practices for Allan Block segmental retaining wall design for residental and commercial applications.

Design Guidelines Item: The term, "owner" refers to the property owner or their designated representative.

6.1    Understanding the site soils as well as the soils used in the infill zone is essential to understanding how the retaining wall will

function. One of the economic advantages to an SRW system is that site soils can usually be used in the infill zone provided they are of a certain quality and surface and groundwater conditions at the site are controlled by recommendations given in Chapter 3, Chapter 4, and Chapter 5.

6.2   Allowable soil to be used below the wall structure face.

6.3   Allowable soil to be used in the reinforced mass.

6.6    Establish inspection and testing requirements in advance of providing a design. The professional in charge of this work must be retained by the owner.

6.7   Compaction Requirements at the Face of Wall

6.9    Compaction requirements for all soils in areas in, above and behind the reinforced mass. 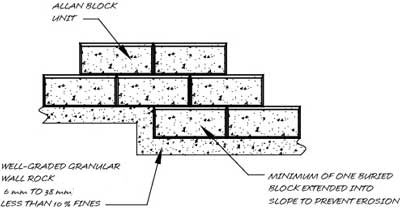 6.12   For walls with step ups in the base course, extra care should be given to properly compact the base material at the end of each course to add greater stability to the next course, Figure 6-3. 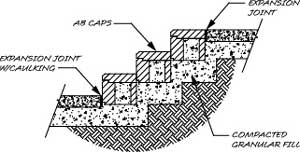 6.13   For a walls with steps built into the wall, additional compaction requirements and wall rock should be included into the project specs,
Figure 6-4.