To ensure that acceptable work standards are understood during retaining wall installation, construction tolerances need to be established. These construction tolerances should consider that the retaining wall is designed to be a flexible structure that tolerates horizontal and vertical variation. However, too much variation can affect the structural stability of the wall.

To maintain horizontal and vertical control, adjustments may be required during modular block installation. Even with tight quality control procedures by block manufactures, modular block units may vary in height. Shimming a maximum of 3 mm per block is acceptable construction practice. It is recommended that shimming material be asphaltic or non-degradable products.

Acceptable construction tolerances are illustrated in Figures 13 thru 16.

Foundation settlements must be estimated with great care for buildings, bridges, towers, power plants, and similar high-cost structures. For structures such as fills, earth dams, levees, and retaining walls a greater margin of error in settlements can usually be tolerated. The construction method of placing the dry-stacked mortarless Allan Block on an aggregate leveling pad creates a flexible but stable retaining wall. Settlement errors that are acceptable while maintaining structural integrity include large total wall settlement and moderate differential settlement as depicted in Figure 14.

Settlement occurs when the weight of the retaining wall structure exceeds the bearing capacity of the soil. Cohesionless soils consisting of sands and gravels often exhibit very little settlement with most of the settlement occurring during or shortly after wall construction. Cohesive soils with high moisture content have the potential for large time-depended settlement because the weight of the wall can actually compress the foundation soil. The settlement can be estimated using conventional one-dimensional consolidation calculations. When anticipated settlement is greater than the construction tolerances, special design and construction steps need to be taken. 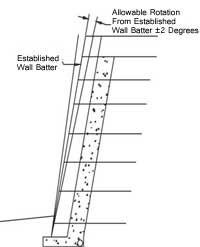 Depending on wall heights, surcharges, soil conditions and foundation materials, some stress cracks may occur in the wall during and after construction. Since Allan Block walls are flexible structures, some cracking of block is likely, as are spaces between blocks as the wall moves. These openings should not exceed 6 mm and do not affect the structural integrity of the wall.